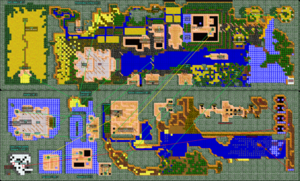 "According to ancient legend, there was a time when dying meant that you were forever banished from the mortal plains of Kesmai. Many valiant warriors and skilled magicians were forever lost when they met a tragic end due to Age (or a dragon's gullet). The Ghods took this matter very seriously, for if too many valiant heros were lost, the land of Kesmai might forever fall into the Hands of Evil. So the Ghods caused to be formed the lands of Praetoseba, or the Underworld as it is referred to in the land of Mortals.

In the Underworld, Souls of those whose valor led them to an untimely demise would be sent to perform certain quests. each quest would restore a part of the body, until the hero was again made whole, when he would be allowed to return to the land of the living. The Ghods would restore the Vigor, Vitality, and Youth of the Mortal, along with such skill as had been attained during the lifetime of the individual.

Finally, as a caution against improper behavior, Set, the forgiver will need to forgive any and all transgressions that the mortal may have commited during his life."

Underworld (Praetoseba) is usually done to restore skill levels and constitution lost from death, and also to restore your youth. It is also required if you are eaten by evil carniverous creatures such as dragons. You have to enter underworld from a black hex located in the graveyard of each land (in Axe Glacier the hex is a green gravemarker by the statue southwest of the portals), stand on the hex and type the chant in command mode: urruku ya zi xul Entering UW drops ALL OF YOUR ITEMS on the hex you entered it on. LOCKER YOUR GEAR FIRST! A hand skill of Black Belt or higher is recommended. All commands are "npc name", teach (ex. "osiris, teach" or "o, teach" without quotes) To accept quest "npc name, yes" (ex. "osiris, yes" or "o, yes" without quotes)

You start in UW in tall yellow grass, go south along the path, through the door, to the sky hexes, jump. Now you're in the main temple. Move two hexes east and say, "U, teach". She will reply with, "Your time here is wiped clean. Begin with Osiris and work your way forward."

First things first, ask Uajyt to train you with "Uajyt, teach" and then "Uajyt, yes" This will cleanse your soul and prepare you to take your organs back.

Find Osiris - West of starting hex in the main temple. Type "Osiris, teach" He will ask, "Do you wish to quest for a stomach?" Type "Osiris, yes"

Give a suitable pet figurine to my son.[edit | edit source]

Go east on the north river bank to sky hexes, then southeast across bridge, then north to the forest, avoid the archer unless you need the bow for the Intestines Quest. Kill the tiger and loot the figurine. Might as well kill the bear for the skull so you will have night vision or if you happen to need it for the Intestines Quest. Kill self and you will be back in the main temple, go southeast from the fountain and give the tiger figurine to Horus, he will give you an amulet to give to Isis. Go north to Isis and give her the amulet, then go east to Imhotep and he will give you a stomach.

Get an ankh from one who was queen.[edit | edit source]

Go east on the north river bank past the first building, go north, to the second door on the east and speak with Tiy, and she will give you the ankh. Take the ankh to Nepherteri who is directly north across a little river, she will have you talk to Imhotep back in the main temple to get your stomach.

Go east on the south river bank to the first building, talk to Khenty he will give you a key. Take the key to Thutmose the Magician (northwest from the temple, swim up the little river, then east along the south bank to the door, then south) give him the key and he will tell you to talk to Imhotep back in the main temple to get your stomach.

Find Anubis - Go east along the north river bank, inside the first building. Type "Anubis, teach" He will ask, "Do you wish to quest for a intestines?" Type "Anubis, yes"

Take a special bow to the Goddess of the Hunt.[edit | edit source]

Give the skull of a bear to the God of the River.[edit | edit source]

If you had the tiger quest you should already have the skull, if not then Go east on the north river bank to sky hexes, then southeast across bridge, then north to the forest, watch out for the archer, kill bear and take skull to Sobek (small island south of the fourth building from the temple from the north river bank) then see either the West Nymph (southwest from Sobek surrounding by trees on the river bank) or East Nymph (southeast from Sobek surrounded by trees). Take the gem from the Nymph to Nehebku back in the main temple, southeast of the fountain and he will give you intestines.

Find Sekhmet - Go east along the south river bank inside the third building, down stairs - see Ra or Nefertem Type "Sekhmet, teach" He will ask, "Do you wish to quest for a liver?" Type "Sekhmet, yes"

The Sun God shall be your guide.[edit | edit source]

Jump in Fire hex in Sekhmet's room. You will be back in the main temple. Go NW or SW from fountain to stairs and climb up. This is Ra's chambers, go talk with Ra and he will tell you to "Seek the wisdom of Ptah." OR "Lead a lawful cobra to Re.Harakhti."

Inquire of my brother.[edit | edit source]

Nefertem is Sekhmet's brother. Seek him out. Otherwise, the quest is identical to Ra. You will either lead the cobra, or find Ptah. See above.

Kill cobra in Ra's chamber, take boots and exit temple to the north. Follow the sidewalk all the way east, past the dark portal room until the grey sidewalk turns back to trees. When you see the sidewalk turn north and dead end into the air, follow it and jump north into that air (you will need FF boots from Cleopatra. If you do not have them, the dark route is best.) Move northwest into the water and continue north until you see Re.Harakhti. Give him the boots.

If you prefer the longer, darker route, then climb down rope NE of Sekhmet's building, go northwest, then north, find Re.Harakhti, give him the boots.

Go east along the south river bank to sky hexes, then swim north to the island, climb down rope, then east southeast at the end of the cavern, see Ptah, kill self, then go down the stairs, then on the far west wall of the temple is a door, Thoth is in there.

See Khnumeri – use map "Do you wish to quest for lungs?" -"Seek the most beautiful woman, she will give you lightness." Kill yourself and head back to the temple. Exit the temple and go see Cleopatra. Say, "C, teach". She will give 1 of 2 responses and a pair of feather fall boots

"I see. Then I send you deep below! Take these boots. Seek the warrior who lies beneath the tomb. I fear your path will be long."

Once on the other side, move 8 hexes east until you see a set of stairs and an air hex. With boots on, jump through air hex. Move southwest past the fires, then through the door and back to the east. Turn north through the door. Lay the boots at the feet of Montu and say, "M, teach". Montu replies, "Good. You may survive where others have fallen, so I do not give you your lungs just yet. Take this Wand of Blindness. Give it to the Master at the Headwaters, but beware of the Demon..."

Take the wand and put it in your left hand. Move back to the fires and kill yourself to go back to the temple. Discard the red gem.

Exit the temple and move north and west until the clear the temple wall, then move northwest until you see the east/west river. Follow it west until you see it turn north and go through the wall. Follow it north and around the bend to the east. When the wall opens to the north, proceed north carefully. This is where the demon lurks. In order to use the blindness wand, you'll need to double click it. Blind the demon or kill him but proceed west and then north until you reach Khepri. Lay wand at his feet and tell him to teach.

"I see. Seek then, the war goddess who rules from beneath the tomb! Take these boots and be on your way!" Pekhet: Go up stairs. then up stairs again, jump wearing FF boots into the west sky hex, find Pekhet give him FF boots, kill self.

Go east on the north river bank to sky hexes, then north you should see a yellow brick road follow it to the northeast, through trees, then south east to the teleport hex, and that's it! If you lose any of the items you need to finish a quest, you will need to talk to Uajyt and have your quests reset. Uajyt: Do you wish to give up all your organs and start again?! Your body is as when it enter this land.