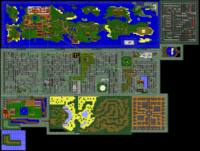 An island nation with a colorful history. Many years ago, Kesmai was the central base for a group of Pirates that were plaguing the high seas that surround the island. There pirates were ruthless, and they plundered many ships passing between the different Nations (picking on the Illyrian ships the most, due to the vast wealth of that nation). In setting up their base, the Pirates cleared the entire surface of Kesmai. Much of the indigenous life was destroyed, or moved underground to avoid the marauding pirates.


After a while, the Brotherhood of Yasnac, having been ousted from Mu and other provinces, were looking for a base of operation to continue their evil experiments. They discovered the island, and quickly made an alliance with Pirates to use some areas of the island for their own purposes. The Pirates, seeing an opportunity for some quick material wealth, readily agreed, and they allowed the brotherhood access to the Eastern part of the Island.


Soon, though, the Brotherhood grew in power, and they tired of dealing with the pirates. One Night, the brotherhood summoned a Drake from their Dwelling on the East Side of the Island, and they sent the Drake to devour the Pirate camp. Once the Drake was finished, the Brotherhood, in one of the few truly successful efforts, transported the Drake to the province of Leng, where it took up residence, and aided the Brotherhood in reestablishing a hold in that province.


The Brotherhood then took over the Pirates camp, and they discovered there the entrance to the catacombs. In their explorations they found the portal system that had been established by the ancients. A little exploration showed them how to activate the portals, and then allowed them to determine where these portals led them. They were to become a key to many of the experiments that they performed.


The Brotherhood established a small fishing village to cover their existence, and the Brotherhood itself moved to the catacombs below the surface to continue their experiments. As is documented in other sources, the Brotherhood continued to thrive for some time, and were able to plan out the demise of the Grand order of Thaums, who were responsible for exiling them to the island. Other documents go into greater detail on the History of the Brotherhood, and I will not go into any great details here, but the Brotherhood summoned a Dragon, and were prepared to transport it to the Central temple of the Grand Order of Thaums. Disaster struck the Brotherhood, and they were eliminated from the island, and except for a few of the brothers that managed to make it to one of the portals, their presence was eliminated from the known lands.

The Town of Kesmai was re-established many years ago by explorers that discovered the ruins of the Pirate village/Fishing Village. The Treasure that was taken confirmed that this was a great place to be, and so early colonists fought to reclaim the Land. Only the Town proper was reclaimed, and the rest of the island has finally reverted to it's original wild state. To the Northwest of the town is an ancient shrine that can be used to send one's essence into Limbo, to later be summoned by an Ancestor. This can be beneficial for those times where a person has reached the end of their existence, but would like to pass on their knowledge, and maybe a special weapon, for their Ancestors use.


Southwest of town, in some ancient ruins, is one of the entrances used to enter the dungeon. Slightly north of this ruin is a Demon Altar. In the town itself, one can find the Temple (rebuilt from the temple that the brotherhood built, and scoured so that any evil markings have been removed). Also in the town is a Gym, the Bank and Lockers, a Jeweler, the Armory, and the weapon Smith. The Blue Noose Tavern was established by Rolf's family many years ago as a place for adventurers to gather, exchange stories, or plot new hunts. A tanner shop was set up to help adventurers create some of the more exotic armors and furs.


Inside the temple is the main entrance to the dungeons proper. There is a guard kept in the temple to keep the vermin from climbing up to the town, but otherwise, the dungeon is left intact (by order of the Kesmai Chamber of Commerce.)


Due to some extremely high magics, the Town is constantly lit, and no harmful magic may be performed.

Head down to -1 Kesmai and travel left until you reach the left side of the the map. Head north and there will be a rat, this is how you will know you've arrived. Inside and to the east, there's a small room which usually houses 1 random mob and the Librarian. He can be trouble to newer players due to his knockback which can stun you into walls, but other than that he's just a beefier skeleton.

Trog is the King of the Trolls in Kesmai, and resides in his lair above Kesmai -2. After the Librarian, he is probably the easiest lair monster to kill, and before the Librarian was added to the game was often the one people kill first. He fights like a troll and does not use any spells, although he has more hit points and takes longer to kill. He can knock back with his attacks, so be sure to move away from the air hex.

Daisy is one of the most seeked out lair creatures, for the fact that she is an integral part of the Knight's Quest and sometimes holds a returning hammer in the back of her lair. Make sure that you have plenty of fire protect before attempting to fight Daisy, as she casts powerful fire spells often through the fight. If you are a Magic User who helps a knight to fight Daisy, bring plenty of balms because Daisy centers her attacks on the Magic Users in the group. A group of 4 who cooperate well should be able to beat Daisy, but be careful because her lair is a no-recall zone. which means, if you are in trouble you have to run all the way out of the lair just to escape. After killing Daisy, be sure to take the corpse to the tanner to get a nice set of dragon scale armor.

Ydnac is located southeast of Hermann's (which is where knights go to complete the Agate Quest). He resides in his lair with his tiger pet. Ydnac has very powerful death spells, and if you have no death protection, he can easily take 90-100 with one death spell. The easiest way to beat him is to wait around the corner of his lair, warm an attack spell (death works well) move around the corner and hit him with it to fizzle his spell, then run back around the corner before he can hit you. Repeat this strategy, but keep in mind he may try to chase you so get far away. The returning hammer is located on the altar but is not a guaranteed drop.

Head east of outside of Kesmai, past Ironbar's house, and there will be a spooked.rat next to the water. Swim southeast and you'll see the Great.White. He can move and attack in the same round so be careful. Death spells do not work on him, further testing needed.

Not much to it. There will be 2 Daisy dragons hanging out with him. Funny enough, their fire will significantly hurt Kujo So, fight Kujo and let the Daisy dragons keep burning him down to make the fight go faster.